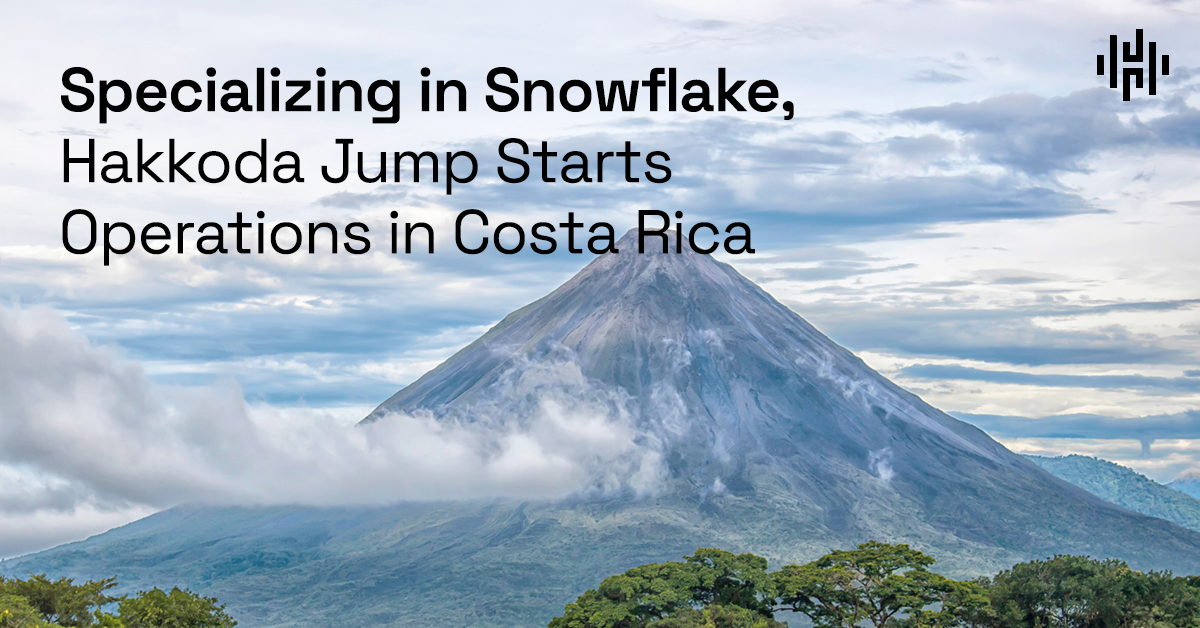 The Costa Rican capital of San Jose is a long way from the snow-capped mountains of Japan from which US IT services company Hakkoda takes its name. That hasn’t stopped the company, founded in only July last year by industry veterans Erik Duffield and Patrick Buell, calling the thriving Nearshore location their new home.

At the moment Hakkoda is a 60 person team, with the majority – 35 – in Costa Rica. That number will increase to 150 in the short term and then to 300 in the next two years, with the expansion taking place in San Jose. This growth will require an US$8 million dollar investment which will largely be focused on the buildout of facilities, payroll and, critically, training.

“We have found great talent with core technology skills like Python and SQL. But we’ve licensed the training and built a learning and development team to train that talent in modern cloud architecture, modern data stack and design patterns. Our investment is largely around people,” Duffield, also the company CEO, explained.

Hakkoda’s two verticals of industry expertise are healthcare – healthcare data, data interoperability and creating new products with healthcare data – and fintech, particularly in banking and lending. The expertise is applied via the Snowflake cloud data platform, where all company activity takes place. Indeed, so important is the company’s relationship with Snowflake that its name is a homage to the strong connection: the Hakkoda mountain range is the snowiest place on earth.

“We really believe Snowflake has a leadership position and is transformational for organizations because its vision is much broader than a cloud data warehouse. It’s a data platform that allows rich data applications, it’s a data science platform, and a data sharing one too. It’s truly omni cloud,” said Duffield.

This is vital to the company’s business strategy that aims to meld the capabilities and scale of a global systems integrator (GSI) with the focus and flexibility of a boutique.

“We call it the Goldilocks strategy; not too big, not too small, with the ability to scale. We have the capabilities of a GSI, we invest in a Nearshore operation that has competitive rates, and we have vertical depth and expertise that only GSIs hold,” he added.

Not yet a year old, Hakkoda has already taken on some major clients.

“Our first client was a US$24 billion supply chain organization,” he said. “These days, customers need scalable capacity and a partner that can increase and decrease their data engineering and data science talent based on their backlog that they have right now. They want alternatives to GSIs, but that have the knowledge and the ability to blend with their teams to help them execute,” said Duffield.

“We launched in July 2021, and that gave us the benefit of building a post-pandemic organization and culture. We’re a data engineering and data science company, and our organization was built to attract and retain the most competitive skill set and technology right now,” he said.

Duffield is no stranger to building outsourcing models from the ground up. He has previously built three other organizations using India as the base – “amazing talent, massive capability and scale,” he says of the world’s largest tech outsourcing nation – but the post-pandemic cultural shift around working processes and truly remote working has, he believes, given the Nearshore region the upper hand in the eyes of contemporary tech companies.

“Predominantly, this means timezone, and that means Latin America,” said Duffield. Time zone synchronization with clients provides obvious benefits in agile work processes, but this shift in perspective was also driven by the talent angle, and a growing understanding of the needs of talent in a changed world, Duffield explained.

“Attracting top talent in India means having them come to work early or stay late or have a third shift. This is hard for people and it adds additional pressure in a market that already has high attrition and wage inflation,” he said. “Things have changed. Tech leaders are now at home and trying to prepare meals for their families and they don’t want to jump on a call at odd hours anymore.”

Nearshore is more than Costa Rica, of course. In Hakkoda’s search for a Latin America home, Colombia and Mexico were both thoroughly considered. In the end, Duffield’s affinity with the Central American nation – he’d been traveling there for 10 years – and the country’s commitment to education and thus provision of high-end talent, was the difference.

“The country has a real, and well known, commitment to higher education. We have a Costa Customer Innovation Center in Costa Rica, not an offshore development center, so they run soup to nuts; engagement management, project leadership and other positions that require high interaction with customers. High-level English was vital,” he said.

The country’s prowess in IT services is certainly well known, and it’s one that has led to a tight labor market and given rise to questions around value against other regional countries. But the pandemic has generally lowered these concerns. While the scarcity of tech professionals in Costa Rica ranks equally to levels in Canada and Singapore, the same difficulty in finding top talent exists in Mexico, Argentina and Brazil, as Nearshore Americas reported last year. Wages, once higher in Costa Rica than many other Latin American countries are now on par thanks to the sharp rise in wages that the tech industry is experiencing globally.

Costa Rica’s investment promotion agency CINDE worked closely with the company and provided help navigating the process of setting up. “They’re personally invested in us building relationships with universities and PROCOMER,” said Duffield.

For its part, CINDE underlined the importance of IT service companies to its national economy: “These types of companies contribute significantly to our matrix of knowledge-intensive services exports, which represented 75% of all services exported by Costa Rica in the first half of this year. Likewise, these companies are a source of formal job creation for more than 12,000 Costa Ricans, as of 2020,” Jorge Sequeira Picado, CINDE managing director stated in a recent press release.